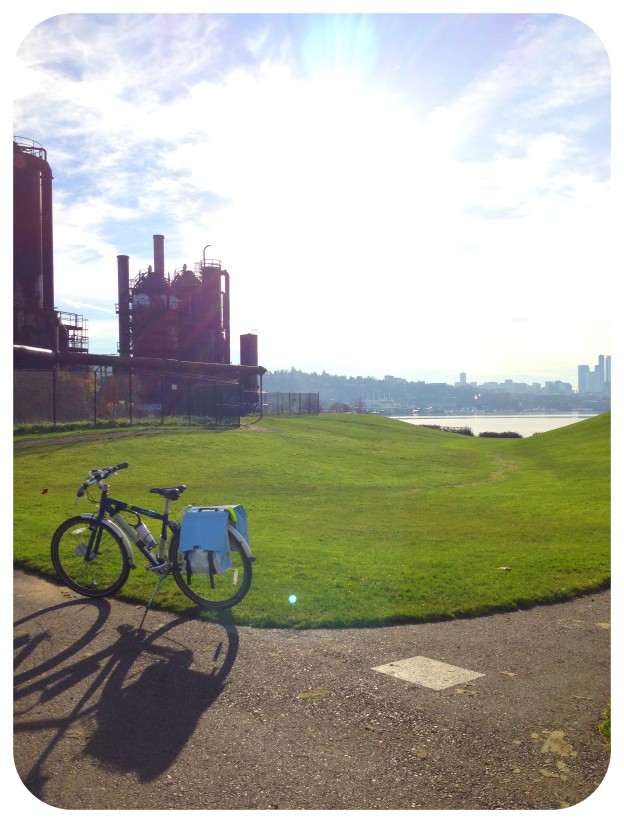 In the last few years, through a dramatic health-related life event, I have (a)become a little more acutely grateful of being alive at all, and (b)felt a more urgent need to put in the time investments now to ensure a longer and healthier life. So in that vein, after the unhappy consequences of Reduced Sugar Challenge October, November is Sustained Exercise Month, with a weekly minimum goal of 150 minutes of exercise activity (also smaller portion month, but that’s a different post). It feels like an uphill battle with the increasingly dreary overcast weather outside and waning hours of daylight, but also a necessary one to get a jump on holiday eat-o-ramas (not to mention snowboarding season).

I prefer tricking myself into exercise, like getting outside running before you are awake, so you have no choice but to continue running, or accidentally agreeing to long hikes with friends when you imagined a 2-mile flat path. Happily, this weekend a good friend of mine agreed to try out Cranksgiving Seattle 2013, a charity bike scavenger hunt that donates to the Rainier Valley Food Bank. So I got to fulfill my remaining 30+ minutes (bike commuted to and from work once, and yes, I counted the 40 minutes of raking too) while getting some sun, and helping some other folks who need it more get fed.

It was a pretty nice day for a ride, a little chilly but sunny. I like to tell myself that trying new routes (a.k.a. getting really lost) helps exercise your brain cells to ward off Alzheimer’s later too. The gathering place was Gasworks Park, and it was darn scenic: 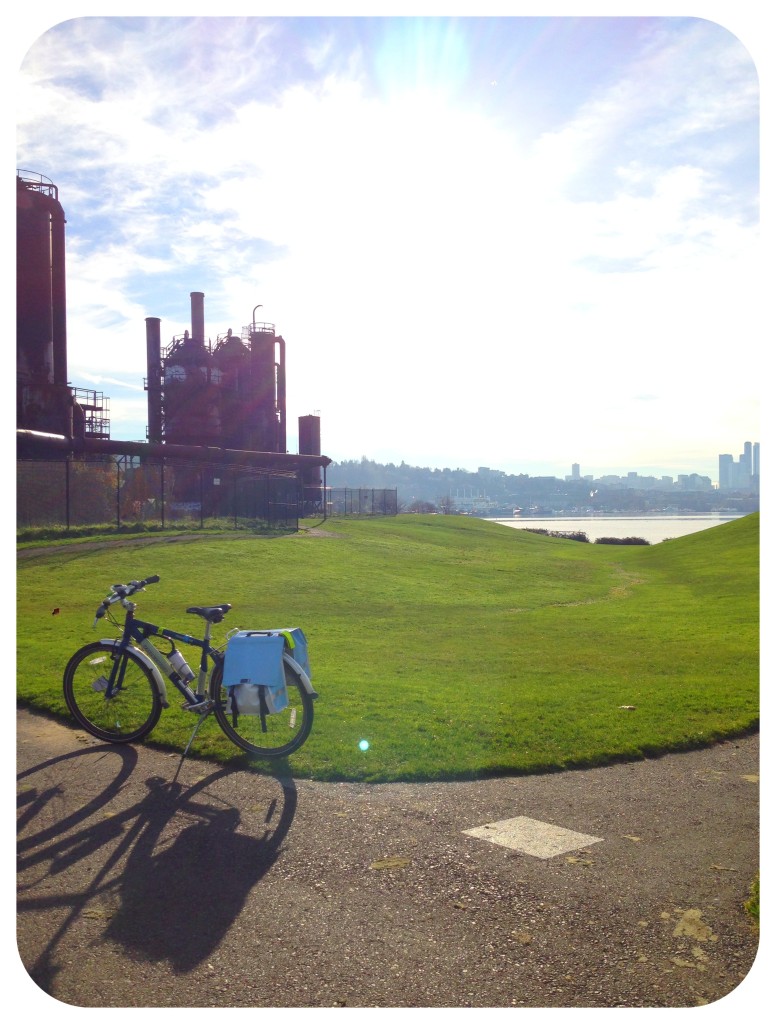 They ran out of manifests listing locations and items to get, but we took pictures of it. At this point, J and I had no idea what we were in for. In retrospect, perhaps we should not have dawdled at the start, or headed north instead of south, away from the final destination in Columbia City. We probably could have done without the fun stop to retrieve her wallet, drink water, take a picture on a boat (per the manifest). At any rate, it was a nice enough day out that we didn’t mind when it became clear there was no way we were going to make it there in time for the 1:30 check-in, and, it turned out, the raffle. Oh well. 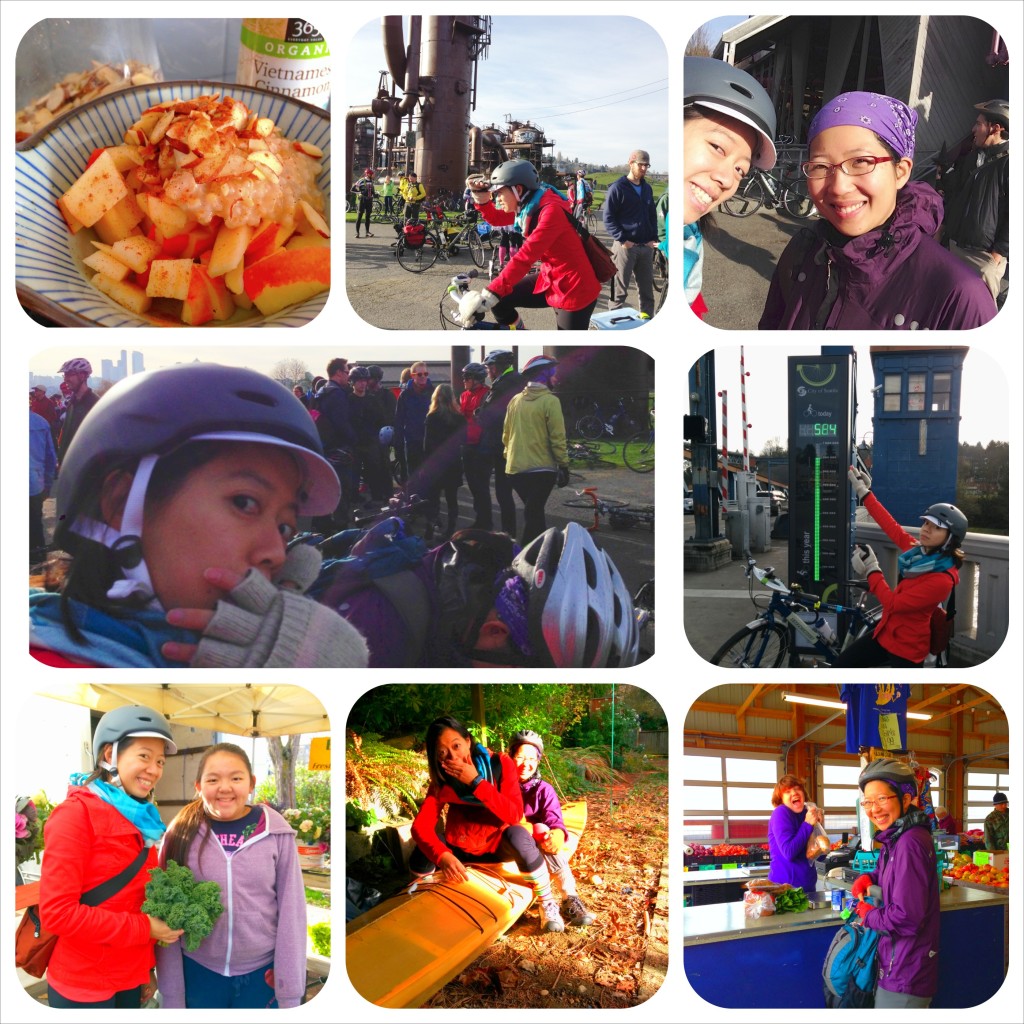 Thank goodness I had a sturdy oatmeal breakfast, as this event barreled right through lunch time. We got a late lunch at Grecian Delight, quite tasty, uncertain what percentage of the tastiness was related to the mealtime skipping. There were lots of folks at the food bank lined up to get food, and plenty of bikers still dropping off when we went. While we didn’t bring as much as I hoped, it still felt good to know the bank provided its fresh produce as soon as possible to its clients, so hopefully when they get it home spoilage is minimal and healthy choices abound. I wish I’d known I’d see so many asian grandmas and grandpas there, I’d have gotten more rice. Oh well, maybe next time.

Novelty Rating: 4 of 5
Likelihood of Repeat: 60%
If the weather is as beautiful next year, it will be very appealing, but I’ll have to do some research and strategizing ahead to determine which store is most likely to actually allow enough time as a slowpoke rider to get to the destination, and resist the urge to go to the farmer’s market. I got more than my 30 minutes’ exercise, though, and a good bit of happy sunshine and scenery. I was glad of the sturdy oatmeal I had before I left the house, though, since the whole thing barreled right over lunch time.
Mission Accomplished? I think, dear reader, you and I would both agree I did trick myself into more exercise here. I even tricked J into it, and hopefully not so much that she’ll obstinately refuse to join next year. Additional good news a few days later: no sign of back pain from riding for 1+ hours.