A guest post from my friend Tricia! Y’all get a two-fer today, enjoy!

When I read about Yiling’s upo bounty, I was excited to take one on for myself. I love all vegetables and love to think up creative ways to cook them. Reading more about the squash, one recipe quickly came to mind. After looking further at how it was used in different recipes, I had another plan in mind – not a recipe, per se, but an approach.

Two upo’s arrived on my doorstep one evening and I was very impressed by their size and their heft. 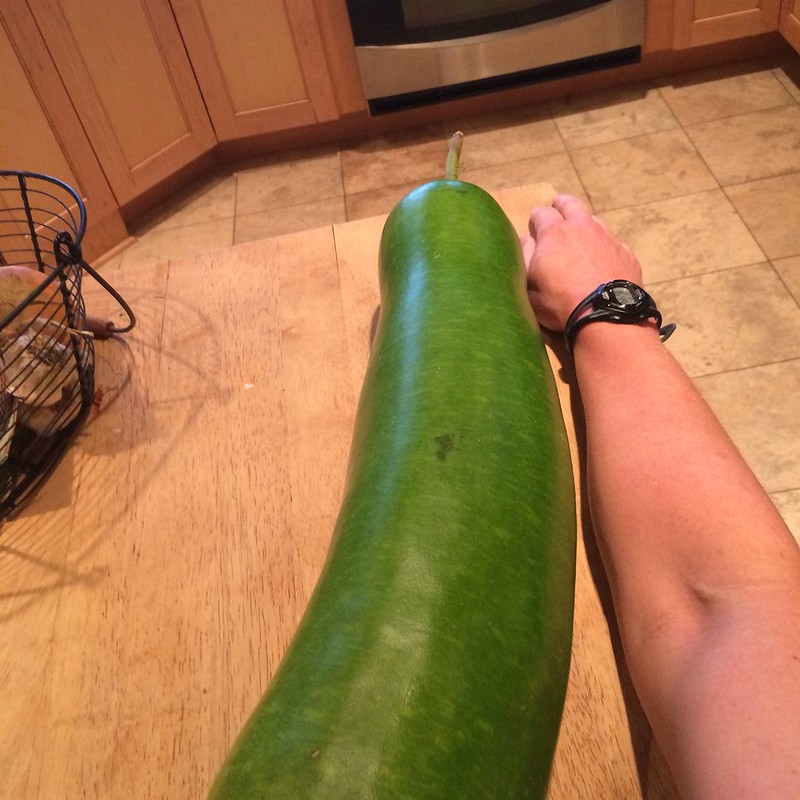 Carrying one is akin to carrying a pumpkin, if the pumpkin was long and oblong rather than round. The rind/skin was very tough – nothing like a summer squash or cucumber. It took some muscle and a lot of patience to carve the rind off of the more tender center. Some parts of the squash were notably woodier than others with large, tough seeds. This was different from the pictures I’d seen, so decided to cut that away. I am guessing that this is because the squash were harvested late and/or had sat for a while toughening up. Regardless, even after cutting out about a third of the squash, I was left with enough for both recipes I wanted to try. Each recipe made 4 servings.

For my first attempt, I started at the butcher. B&E is my local butcher – taking over from A&J Meats, a Seattle institution. Fortunately, B&E hired the butcher who made A&J’s sausages, which were and are once again fantastic. I picked up 2 traditional bratwurst and 1 chicken garlic for a total of ~ 1 pound of meat. The butcher removed them from their casings, so it was ready for me to sauté along with a diced onion. I added to that some roasted poblano (spicy!) that I had left over from my CSA, several tablespoons of minced ginger, some rice wine, a spoonful of chili-garlic sauce, and a 14 oz. can of diced tomatoes. Then the cubed squash joined the party as I let everything cook together for an hour or so. The result was delicious – like a bolognaise but with more heft from the squash and spice from the ginger, pepper, and chili. I served this with roast spaghetti squash. 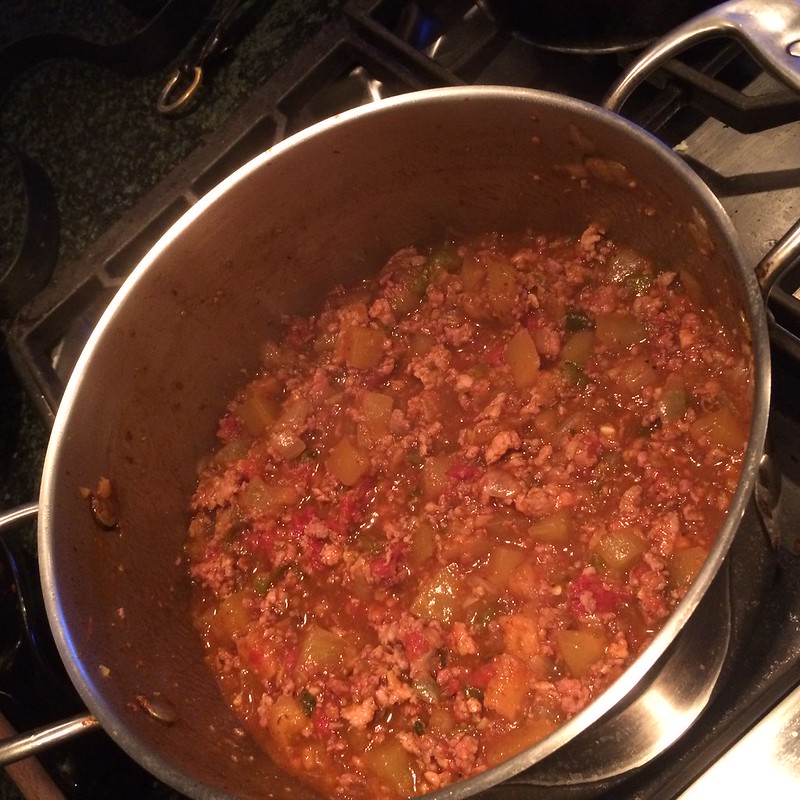 For upo #2, I followed this recipe from food52: Miso Quinoa Pilaf with Grilled Cucumber, Eggplant, and Soy Dressing:

I substituted the eggplant and cucumber with the upo and some diced radishes (also from the CSA box; wasn’t sure what else to do with them). I followed the recipe, more or less, other than cooking the quinoa in stock rather than milk and stir-frying the veg rather than grilling them. I also added the miso at the end, as it’s my understanding that you get more of miso’s health benefits if it doesn’t boil. Again, terrific results: the balsamic/soy/orange/miso combo was intensely flavorful, the radishes added crunch, and the squash rounded out a healthy vegetarian meal.

Novelty Rating: 5 of 5
It was really fun trying something totally different, especially as there is very little about this on the internet. The recipes I used also had very unusual flavor combinations, which made the meals fun to eat.
Likelihood of Repeat: 5%
While it was really fun trying something new, the squash took a lot of work to cut up and it didn’t, on its own, contribute much to the flavor of the dish. I would, however, try the recipes with other vegetables, however, like eggplant, cucumber, and summer squash.
Lesson learned: This was a good reminder that really tasty sausage can make a dish very special. I’ve already gone back to B&E to try another variety for another recipe.

Thank you, Yiling, for giving me a fun culinary experience!