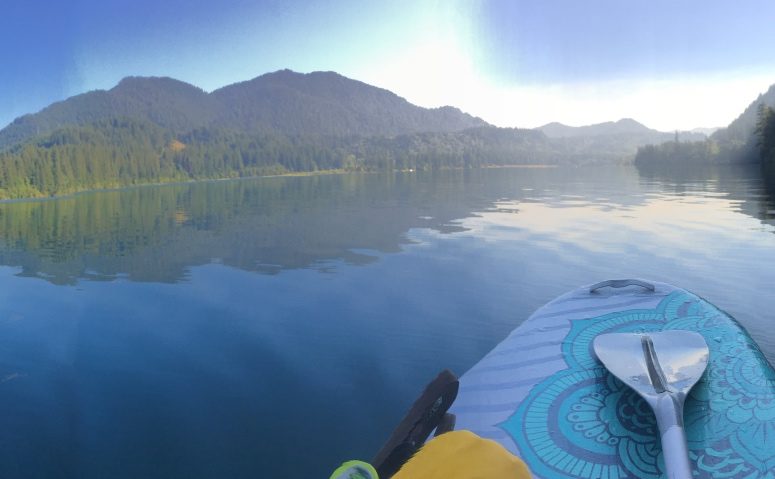 As the days yawn longer and air gets warmer, my snowboard powder dreams recede and give way to the echo of hypnotic rhythmic waves of a good lake paddle. Several friends asked me about my SUP (stand up paddle board) equipment, all in this last week, so I thought it was finally time I jot something down for you.

Q: Which paddle board do you have? Thinking of making an investment.
A: Woohoo, SUP! I have this one from Isle Surf & SUP:

This set includes the hand pump and storage bag, both are very handy. I love my SUP board, it has brought me so much joy and tranquility.

That said, here is a size chart you can compare to your height so you get the right fit: SUP 101: Paddle Board Weight & Size Chart (Isle Surf & SUP)

Q: You’re happy with it? Inflatable sounds awful, but look a lot cheaper than the non-inflatable..

A: Yes, very happy! I’ve brought it with me all over the Pacific Northwest since Fall 2016, a feat which would’ve been hard and much less likely with a rigid board since I have a Honda Civic so it would’ve been hard to carry and store. Once inflated to proper PSI, it’s quite rigid and stable. I suspect that a different rigid one would be extra maneuverable, but not nearly so grippy for those nice yoga stretches. To me, inflatable is worth the trade-off for portability. How portable? Well, I even took it on my back on an e-bike to get it from my AirBnB in Bend to paddle the Deschutes River the weekend of the eclipse. Yup.