(October Week 5 Trial)
I banked this Spanish Bread & Garlic Soup recipe in my Evernote recipe folder last April waiting for the right day, which apparently meant in the Fall, when I’m in the mood for soup. Having to watch the video for the actual instructions behind ingredients -including turning the heat up and down a bunch- may have had something to do with it.

I started with the prescribed ingredients, including some home made chicken stock from a Sunday a few weeks ago:

Baked the bread at 350 for 15 minutes and forgot to include olive oil, sliced tons of garlic thin by hand (my amateur area of expertise!), sauteed it, then sauteed the ham..

Added the bread to the mix, and paprika.. 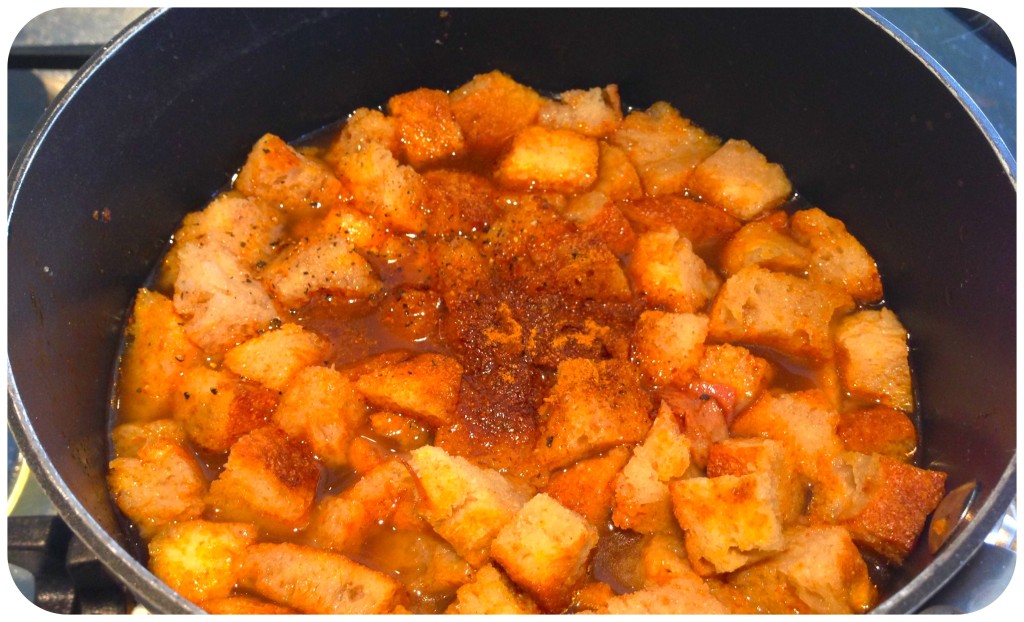 Brought it to a boil, salted, peppered and cayenned it to taste, and popped in a couple eggs* in to poach on low covered,

This week’s trial recipe ratings:
novelty: 4 of 5 stars
likelihood of repeat: 75%
My test audience of one mentioned it was a little carby, and I have to agree. I was not expecting quite so much bread-to-garlic substance ratio. I think I’ll probably make this on a lazy weekend for half the portion size, and possibly when I’m the only one home. It’s definitely a good recipe for a low budget if you have some stale bread lying around, paprika, broth and garlic.

*Let’s just pretend the first egg was not lost to the bready, soupy abyss and got overcooked, and that this perfect, just-runny egg in the picture was the only final product.

Addendum: Four days later and I finally finished the leftovers, what was I thinking on those giant portions! A tasty poached egg with a just-runny yolk definitely makes the flavor right in this soup, which I found hard to replicate via microwave egg poaching at work (yolk gets cooked too fast too evenly). I may try this poached egg addition to some other soups too.