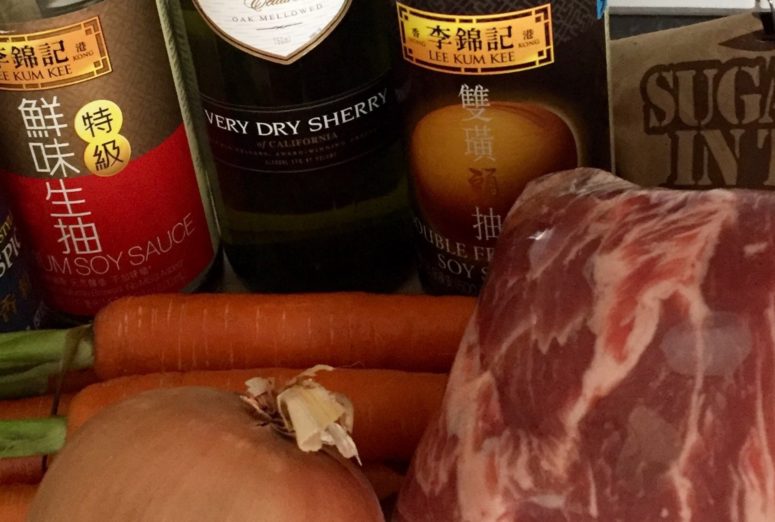 Is it Fall? Is it windy with a risk of power outage in the Pacific Northwest? Are the daylight hours narrowing into a tiny sliver of hope/despair? Did I just go to Facing East and have stewed pork after a 7 mile hike a few weekends ago?
Time for some long-stewing braised pork! Check out the new gif below.

Below is a combo of my old friend Jenny’s roast pork recipe plus another recipe she sent me (photo from a book). You can generally find five-spice powder at your local Asian grocery store, or online if you don’t want to make it yourself. I’ve known Jenny longer than I haven’t, and she’s been a long-time co-conspirator for cooking tons of food to overfeed people. I’ve learned a lot from her, in cooking and life. Even though we grew up together, she’s one of my favorite role models for living courageously. Thanks a bunch for this recipe, Jenny!

Steps
1. If frozen, allow meat to thaw completely. Submerge in a pot of boiling water for 4 min. This will draw the blood out of tissue. Cold soak the meat for 10 minutes, remove water.
2. Put ginger and green onions on bottom of stew pot (I used a dutch oven), add meat, then add water, soy sauce, wine, sugar, Five-Spice powder, onions, (pick the smallest pot possible to fit meat and sauce, liquid does not need to cover meat entirely).
3. Bring to boil then stew (simmer) covered at low heat for 1.5 hrs or till tender and pork has reached safe cooking temperature at 160F. Turn occasionally to coat sauce over all sides.
Optional: start some rice (or quinoa) cooking at beginning of simmer.
4. Warning: the sauce will be very greasy. De-fat before attempt eating the sauce (or if you are storing up for winter, mix it in good!).
5. Optional step: you can cook carrots, cauliflower, egg, or other veggie of choice in sauce for 15 min and serve over rice. I did carrots, eggs, and a little cauliflower.

*Five-Spice powder (if you can’t find it at the store):
cloves
peppercorn
cinnamon
fennel
anise

Remember: 160 is the safe temp for pork! Nobody wants trichinosis.

Novelty Rating: 4 of 5
I’ve never tried making this piece of my heritage, and smelling it for a couple hours before getting to dig in definitely builds the anticipation.
Likelihood of Repeat: 85%
This certainly does take some time commitment (about a half day), so it’ll be a while before I try it again. I may also try out a few slow cooker versions of it. I think that would involve cutting down on the liquid since you don’t lose as much liquid in a slow cooker.
Lesson learned: Next time stew meat for a minimum of 2 hours, and just barely at a simmer or else it gets tough. I was short on brown rice at home, so I also boiled some noodles in the liquid, which made for some pretty rich noodle soup. Also: if you have extra and you’re not the most happy with the tenderness, it’s a nice ego boost to give it to a friend who just had a baby, is short on time, and has no idea what Taiwanese braised pork usually is like.