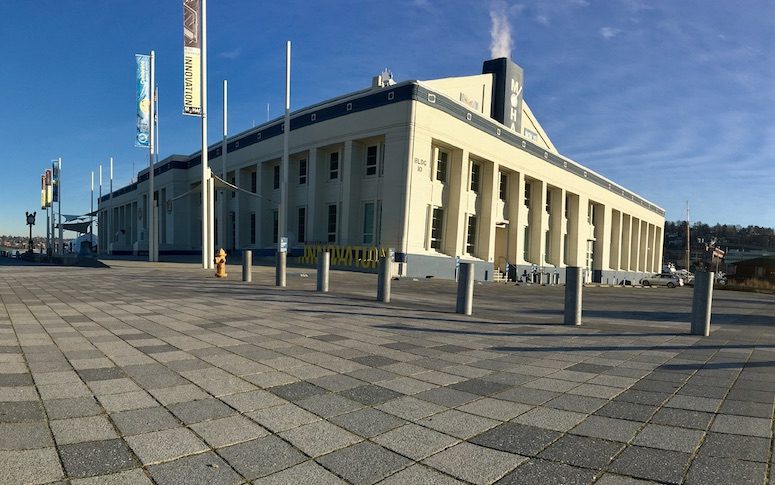 One overcast Friday, I ventured to the Museum of History and Industry (MOHAI) to check out their Edible City exhibit with my friend Sarah and her two kiddos. We wandered in from the parking lot feeling lucky to have found a spot (not free, max 4 hrs) to park and paid the $20 per adult. The kiddos got in free since they were under 14 years old.

The other parts of the museum: everything but Edible City

The ground floor had a nice interactive building block area for kids, a good visual pun, and a historic display with an interactive moving parts. There was ample historical coverage of local companies gone global, from Amazon to Boeing, to global social works funded by local foundations. Upstairs, we found a neat startup map that showed the vast network of interconnected companies. It was like playing six degrees of Kevin Bacon, but corporate. Sarah mentioned MOHAI had done some adjustments to accommodate being more kid-friendly, and I could see where they had added some step stools and to help give a leg up. Some exhibits did appear mounted for most ages, but were a little high up for the four-year-old I was with, and attention span for plaque-reading fluctuated depending on the visual impact of the exhibit. The best part of this museum for running and climbing around is on the 4th floor, there is a play area, which was finally entertaining for toddler Bennett. There is also a periscope on the top floor, worth a look.

The Edible City: A Delicious Journey

This exhibit touched on every part of Seattle’s relationship with food from farm to table: raw ingredients, processing and prepping, market-to-market, home cooking (and gardens), cooking techniques, and serving in restaurants.* It even brought us back in history, and paid homage to many of those, both famous and unnamed folks, who toiled hard in the industry and contributed to the rich food culture found in Seattle today.

I was quite impressed with the breadth of history tidbits, and learned quite a few new facts. I felt the treatment of Seattle’s past was well-balanced and level-headed. It highlighted the contribution of surrounding areas’ supplies of industry and ingredients, and it honored various minority populations’ contributions, and in the case below, the impact national policies had when they were forcibly imprisoned:

“Market vendors over the decades have reflected the city’s immigration patterns and social changes, from Italian vegetable growers of the early 1900s to Hmong farmers who began specializing in flowers in the 1980s. Before World War II, Japanese farmers made up as many as half of the Market’s stalls. After their forced relocation to internment camps in World War II, their abasence was dramatically clear in the Market’s ledger books and vendor lists.”

Some Other Interesting Facts Learned

– Carnation is named for the evaporated milk brand of the same name.
– Julia Child’s signing at Sur La Table was a big influence on the popularity of the store.
– Canlis’ opening chef Joe Ching led the kitchen for nearly 30 years.
– Teriyaki has historically been a staple fast-food of Seattle
– You can get a map of all the cheese makers in the state, for all your artisan cheese needs, from the Washington Artisan Cheese Festival folks, right here! Like a treasure map of cheese gold.
– According to Rowan Jacobsen, Puget Sound is the most diverse oyster-growing region in the world.

Kudos to museum curators, led by two-time James Beard Award winning food writer Rebekah Denn, who worked hard on this, and did a careful treatment of modern local topics, which I’m sure was not easy, especially given that some of it was so close in time, and there was a lot of great stuff to choose from. Double kudos for curating an exhibit inclusive of all the different folks who contributed to the rich tapestry of local food culture, and in turn.

This is a big deal for an Asian American kid from the Midwest who didn’t grow up seeing a lot of Asian names in museum displays or any of her history books. Representation of diverse community members helps me see my role in the exciting food culture landscape. This was also done by including what now feel like everyday objects in Seattle in the exhibit, such as an AmazonFresh delivery, and fancy home sous vide appliances such as the Joule (HQ in Pike Place Market).

– Out of towner visitors or locals playing tourist who would love to learn more about the local food history, enjoy reading plaques, and/or are looking for something different from the usual Underground Tour and Theo Chocolate Factory.
– Tourists: I recommend going before you visit Pike Place Market, for max sense of history. Then, make sure to get some teriyaki while you’re in town!
-Locals with $20: I’d especially be interested in going during one of the events they hold in tandem with this exhibit.
– A rainy day, especially on the first Thursday of the month when museums are free.
– Extra-extra-patient five-year-olds: thanks a million, Carter!

Know before you go

– The benches near the museum may be a good place to bring a picnic and watch hydroplanes take off on Lake Union. Note however, if your kid wants to run and play but you are OCD, probability is high that goose poop is everywhere on the grass (walkways are swept). On the other hand, on a nice day the view of South Lake Union is still tranquil and beautiful.
– The Center for Wooden Boats is next door and may also be entertaining for kids. It’s a living museum, where you can ride in the museum pieces! It is free every_day.
– Steer clear of the board game called something like “cycle of poverty.” Carter and I sat down to play, fooled by the board game setup, but it is really as cyclical as the title. Dice was thrown. Boredom was had, and we were stuck. It was just too close to reality.
– Kids under 14 (ish?) may not be extra engaged except on the 4th floor playground and at the periscope.
– Parking is limited, and transit is not extra-accessible, only somewhat. Food options also limited.

Location: 860 Terry Ave. in Seattle.
Exhibit hours: 10 am -5 pm daily.
Admission is free on first Thursdays and the galleries are open until 8 pm (special extended hours from 10 am to 8 pm on Thursdays during July and August. Regular admission applies).

For insights on the making of this exhibit, see Curator Rebekah Denn’s article in the Seattle Times.
For more on MOHAI: http://www.mohai.org

Special thanks to Sarah for agreeing to go with me in her car and her two kiddos!

*delicious journey did not include any tasting samples.

Update: my friends Kyle and Susannah attempted to leverage the First Thursdays discount to go see Edible City for free. It turns out MOHAI’s general admission is free on First Thursdays, but still charges a $12 for adults, $10 for senior/military rate then. If you are a local resident and up for committing to attending on a specific date, you can also check out the Seattle Public Library’s museum offerings online to snag one of the highly prized free museum passes. You’re welcome, tax payers!