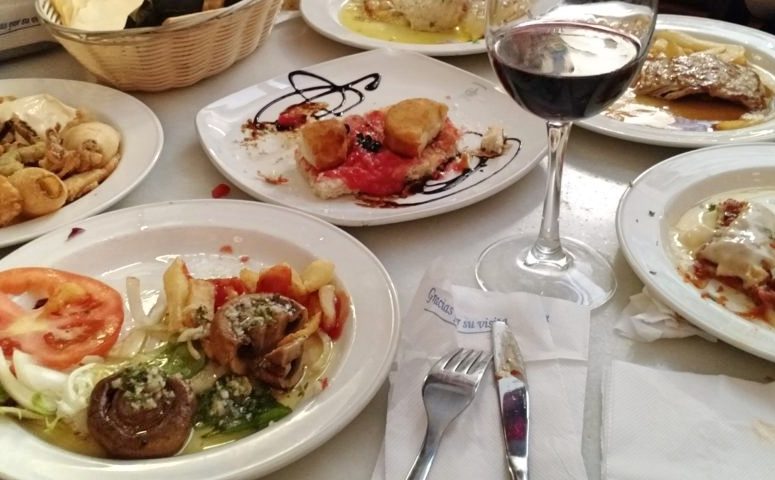 Besides the amazing architecture of Al Andalus (the name of southern Spain during the times of the Islamic rule from ~700 – 1492, the area now known as Andalusia), the area is also known for tapas.

Tapas are generally served in most bars and restaurants.  Some only serve tapas, and are known as a tapas bar.  With each drink that you order, you get small bites of food that come with the drink.  This is tapas.  I described it to others as a Spanish dim sum while drinking.  It’s a whole culture in Spain.  And it’s fantastic.

The type of tapas that come with your drinks can vary widely.  From the very basic potato chips with your beer to a small plate of calamari with your sangria.

It just depends on the restaurant or bar and what they have running as their tapas specials.  But, the best thing is that as you order different drinks, they also bring you different tapas.  I’m not saying the tapas are linked to the type of drinks, just that they won’t bring a second of something they already brought.  Variety seems to be appreciated.

Some of the tapas that we sampled (and you can see many of these in the picture) were:

Because I’m not quite the lush I make myself out to be, you can also order the tapas separately from drinks.  So for a lunch or dinner, we would often order a round of drinks that came with tapas, and then a few other tapas that we were particularly interested in having.  For a dinner, we may get a jug of sangria to split and then several tapas.  Some of the favorite tapas for us were the baby calamari, much tastier than their larger size versions, and I was especially fond of several of the cheese based tapas, such as grilled goat cheese with balsamic, or a baked brie with honey and toasted bread.  But, I’m a fan of those components in general, so it’s no surprise I would gravitate toward them in a vacation or bite-sized setting.

Apart from the delicious tapas, the folks in Spain have a different timing to their meals than I’m used to.  Breakfast was usually something like a croissant mixto (ham and cheese) and tea or coffee.  The Spanish omelets are tasty as well.  While staying in Granada, we found a fantastic crepe place that we ate at three mornings in a row.  I often had the savory crepes of jamon and queso (ham and cheese) while my wife had a sweet crepe of strawberries and whipped cream.

Lunch was either a bocadillo mixto (sandwich with ham and cheese) or something similar, but was often in the early afternoon, or if I was fully on the Spanish schedule, 3-5pm and more likely to include drinks and tapas.

Dinner was what got me.  Many places didn’t even open until 8pm.  It wasn’t uncommon to see families out eating at 11pm with small children in tow.  What makes this timing all possible seems to be a combination of a later start than I’m used to, and the widely enforced nap time, or siesta.  The siesta time was 1-3pm or so.  It was enforced because a fair number of establishments, restaurants, bars, museums and churches, all were closed during this time.  So if you were a tourist like us and didn’t have somewhere to return to for a nap, you were much more limited during this time as what you could do.  Luckily we always found something that was open, although it took some hunting at times to find an open cafe at 2pm.

During the day, it was easy to find a cafe to pop into for a drink, coffee or otherwise, and the gelato vendors are out regardless of whether you are in Italy or Spain.

And let’s not forget the jamon.  Jamon is just Spanish for ham, but I’m specifically talking about the cured meat from a ham hock that is sliced thin.  Basically Spanish prosciutto or charcuterie.  It’s everywhere.  It’s delicious.  I lamented daily that I didn’t have Jamon for at least a week after returning home.  There are many different types across Spain, but the high-end version jamoniberico.  You can get almost anything with jamon.  Our early lunches or snacks were often jamon and cheese sandwiches.  Breakfast at the hotel had a jamon spread.  Every restaurant had a jamon charcuterie available.  It is a great tradition, one that I only wish would take hold here.

When it comes to novelty, it’s hard to beat a small sample of half a dozen dishes with your lunch and a different half dozen during dinner.  Sharing is generally expected.  For those with particular food allergies or tastes, it was easy to get at least 4 or 5 things that everyone liked during a meal.  Vegetables were a bit harder to come across by default.  You did have to hunt them out in your meals a bit.  And it really helps if you like seafood.  If you’re vegetarian, I would say that in general, it would be more difficult to eat without a bunch of carbs.  But that may be true for you all most of the time.

I hope this inspires you to try a visit to Spain.  I had a great time, and you would too I wager.

Karl is an avid traveler to Europe and has documented his recent stays at his blog:  J and K on Holiday

Check out his beautiful photography and more of his perspectives on Spain, including cool doors of the Alhambra, and sangria consumption.