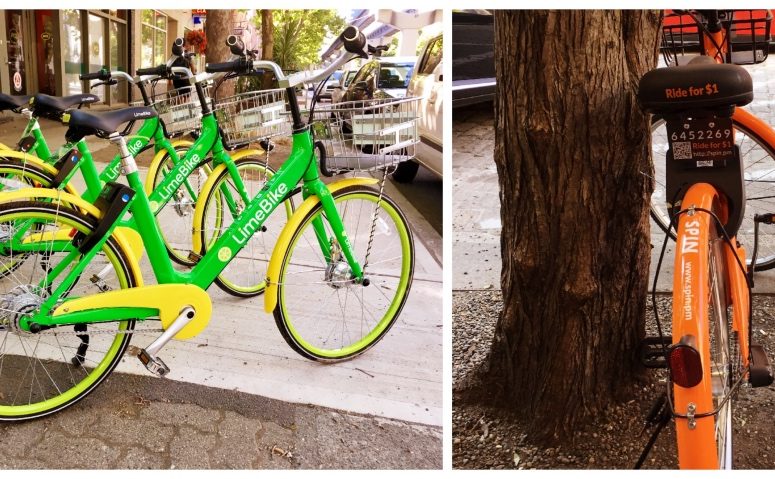 There’s a new colorful set of creatures out in the lush urban jungle of Seattle. As native Seattlites hurry sweatily through the last summer “heat wave” of 76-80 degree weather, you might glimpse a flash of green and yellow behind a tree, a cheery orange appendage sidling up to the pavement, or a blur of both, speeding haphazardly to the next traffic light as they flirt with each other to see who handles best. What’s the skinny?

The Death of the Big Green Giant – when Pronto died
There’s been plenty written about the rise and demise of fixed station Pronto bikes in the last year. As an avid multi-modal mobility fan and urban policy nerd, I was initially excited then sad about the Pronto experience. Besides, shouldn’t a city with such a strong granola reputation have some sort of plebeian access to the spontaneous joy of biking around the city? I took a few trial rides when the bikes were fresh on the pavement. Sadly, Pronto bikes felt so clunky for my frame I didn’t feel safe on them to be able to maneuver out of traffic, so after getting a ‘guest dongle’ for any out-of-towners who wanted to take a gander, I gave up in favor of my own, more agile yet sturdy hybrid commuter bike. I am only barely on the other side of the fence in terms of those who bike commute, and those who view bike commuters as crazy. I currently try to bike 2-3 times a week for about 3 miles to work, previously having done a 7 mile commute downtown from Phinney Ridge along as many dedicated bike lanes as I could find. I still do remember a day when I thought it a crazy idea, so I’m telling you, these are worth trying on your day off, and maybe on your day on too.

Access Issues – for people, for the market
The removal of a logistical barrier of finding a station might be the magic element for more people to use bikeshare, add in some capitalist competition via a free-for-all permitting process and you might just get the right mix for this to stick in Seattle. Having bikes vary in style may also be helpful in order to figure out what works best.

After a quiet spell, some new contenders enter
Spin was first to enter this new stage with their vivid orange bikes across town this Summer, obtained under Seattle’s new permit system. Then followed by Limebike, which offered free rides on their bright yellow-and-green bikes the month of July, and still has a number of promotions for free rides when you add the app or credit card info.

I’ve been taking both for rides to compare.

Both have front baskets that fit my giant tote bag with laptop (so I could write you this blog post).There is no back rack for panniers, but then, you’re unlikely to carry a pannier around like a regular bag (unlike me). Don’t worry, there’s still coverage on the back so you don’t get that skunk-stripe if you ride in the rain to work.*

Ease of access – so easy I forgot, no points for ghost bikes 1:1 out of a possible 2 points for each
Once downloaded, I found both apps relatively easy to use to unlock a bike and see ride history. I’d even hazard that the QR code format method unlocks faster than when I’m impatiently tapping my foot for a Car2Go or ReachNow to unlock via magic waves from the sky (er…Is that how the internet works -with satellites we got up there ages ago? or giant tubes..? Not sure, but I’ve had a surprisingly large amount of time to consider it while I wait for a carshare to unlock). The initial registration of info must have been really easy, since I have ZERO recollection of it. Speaking of access, score one for equitable access: people without smartphones or credit cards can now buy prepaid cards to ride with!  Kudos to the Seattle Bike Blog for its excellent article on this development. Drawback: I was driven temporarily mad looking for 6-7 bikes in a 3-block radius, thus wasting the time I was plotting to save by biking to SLU from downtown – on both apps! I think there’s some kinks to work out. When I took one from a faraway parking spot to the Seahawks v. Vikings game, despite pulling the knob down, the trip did not end properly, and I had to manually restart the app before it would reset. I have no idea what happens to bikes recorded as being stopped inside the CenturyLink stadium.

Maybe Russell Wilson picks them up?

I will award half a point to Limebike because their bikes sing a little diddy when you start and end your trip. If your idea of a fantasy world involves everyone bursting spontaneously into song, this is the bike for you.

Frame: I am small 0:1
Even after moving the seats all the way down, Limebike’s frame feels better for my small frame, Spin felt (even) more immovable like Pronto’s. Does this mean that tall people would have problems with the upper limit? Do tell.

That said, I realize other people are not the same size as me, so this may be only the first round of the match. With all the promotions going on and Summer at its height, this is a great time for you to go try it out -but also perhaps an easy honeymoon period for the companies. That is until…

Enter a third competitor last week: Ofo!
Ofo’s here from China! I started spying these sporty-looking yellow bicycles around the UW campus, apparently from a Chinese company, land of a thousand+ bicyclists, and place where I learned to bike at 18. Did my fellow petite-framed people send us fitting bikes? Have they worked out all their kinks in the fiercely competitive homeland already? Will my phone ever receive the access code Ofo supposedly sent it when I tried to log in to the app this morning? So many questions.

Which of these bike companies has the chair to hit the others with in this metaphorical cage-match?

Stay tuned and keep your eyes peeled on the street to see!

Discount Code for Personal Gain
Here is a first time user code for free rides on Limebike. I get 3 free rides once you use your first one. They did not pay me for this, but clearly I have something to gain for it. Let me know what you think!

Yiling has given you 3 FREE LimeBike rides. To claim, use this link to download the app: https://lime.bike/referral/RUVDFRR

When I worked in King County Public Health, I had the privilege to sit across from one Tony Gomez, who was a vet at working in violence and injury prevention. I fear the poor man was daily horrified when I’d walk in and describe my commute by two-wheels. So I’d be remiss if I didn’t mention that:

Food the Wong Way – on bikes

Geekwire: Why Seattle is poised to be a leader in “smart city” technology and regulations – this article starts broad and moves to bike sharing in the middle.

A Limebike v Spin comparison by Geekwire from July

**thanks for putting up with my arbitrary points system