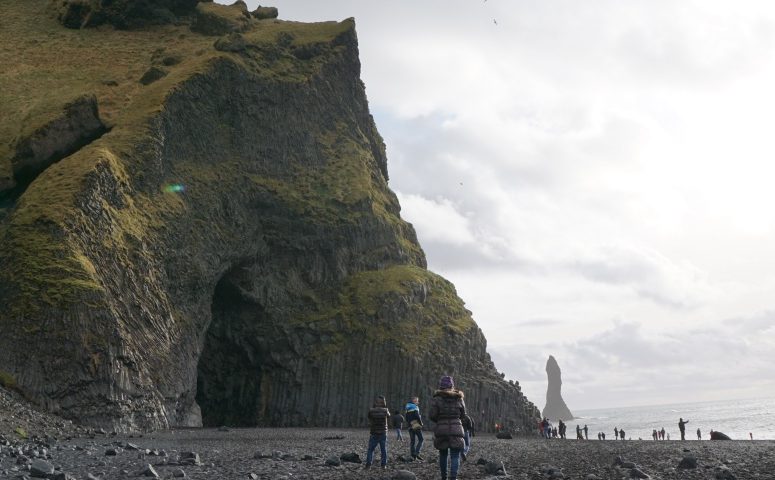 Entertainingly, my travelling companion’s mood lightened with the cold thermal pool debacle, and mine darkened with the rain. Plus wind. I don’t recall what else went on in my mind to dampen things and I don’t care to recall more. May have also been influenced by a morose audiobook.

The distant rock of the towering formations out past the deadly waves on the beach could easily fit the Icelandic legend telling of huge trolls turned to stone at dawn, caught while dragging some ships out (or in?) long ago.

The basalt column formations (although busy with tourists) transported us to the moment of torrential, deadly-hot lava meeting the equally stormy sea, frozen in time forever, in hexagonal rock columns once the sea receded.[10]

Apparently, this was also a place of seal skin legends. Selkies!

Lunch: a modest but delicious stop at a place across from last night’s Restaurant Berg, featuring “meat soup,” a.k.a. Mutton. Delicious!

How to make a tourist destination:

Hold a guesthouse, like seemingly all the farms in Iceland, and pile rocks outside in symmetrical-looking pyramids “for good luck.” Put up signs to do the same. Wait for passersby to accumulate.

We continued driving, as sweeping green vistas gave way to the flat rocky ruins of iceberg flood events. I could still imagine the giant sheet of ice-cold chunky wave scrape-roaring across the terrain, arriving from the mountain ranges still visible in the distance. Check out this Youtube video of the glacial flood event from 2010 that happened in southern Iceland. Woah.

Then: a turn off the Ring Road to rock and pothole-strewn unpaved road, driving until a few minutes past when you begin to doubt if you’re on the right road.

The first glacial lagoon I’ve ever seen in my life. My amateur lens only captured portions of this view, it was so vast. There were few people there to capture the sense of scale. What looked from afar to be diagonal chunks of marble placed in a big mud puddle by Nature was really huge sheets of ice marbled by dirt, displaying layers and layers of varigation representing eons of geologic age.

..then melting into deadly-cold ice water.

The heightened fear of falling from great heights lingered as residual from Monday’s hike as I hopped after Kris, who was casually loping over ice and rock for a better view. The memorial plaques of those gone before us without glacial equipment hardly helped. Still, it was undeniably impressive.

Then: we arrived at Jökulsárlón, a most breathtaking of glacial lagoons. Here, giant blocks of glacial ice lazed about–some five years old!– slowly melting and drifting out to sea in the world’s shortest river. Despite the number of visitors, a hush sat over the place, broken only by a rare drone buzz or zodiac tour boat. A lone and stealthy seal greeted us with a flip of her tail, and thereafter, I mistook every suspiciously speedy ice floe (i.e. all of them) to be a seal. Never did get to see her again.. The muffled cracking of ice and symmetrical sky-to-sea tableau put one in a muted reflective mood, both literal and figurative.

This was entirely the opposite of the lagoon from that boat scene in The Little Mermaid I’d imagined.

We sat and looked, and played photoshoot games. Came up with more excuses not to leave. Boiled water on a turbo lamp stove and drank hot cocoa.[11] Shivered. Stared at the giant sculptures of blue-grey blue wrought by nature, until it was too dark to see anymore. Then we hopped in the car and sped to our AirBnB five minutes after the check-in window.

The guesthouse in Hólmur[12] was well-appointed, with thick walls and a restaurant. Thanks to Magnus for still greeting us graciously and showing us around in Hólmur, despite being a few minutes late. It was off-season and the restaurant was closed, so we had brought bare provisions to use the minimalist guest kitchen for dinner. When we asked some fellow guests if they were okay to share the kitchen space, they quickly cleaned up and scattered. Polite in their own francophone way, I guess.

Pasta with sauce, shaved parmesan, artichoke hearts, and (finally) beer from the Vínbúdin [13] made a delicious meal. Earlier artistic guests beat me to drawing in the guestbook, so I deferred to their intimidatingly good sketches of glacial mountains. Aurora viewing chances were low due to cloud coverage and bright floodlights on-site, relieving me of the itch to stay up late, thankfully resulting in getting a good night’s sleep, full of gently floating ice dreams.

[12] The guesthouse in Hólmur: I highly recommend it, and hope some day to go back in the high season so I can partake of what looks like a lively restaurant space complete with in-house beer! Also: animal petting farm?

[13]Vínbúdin: the state-sanctioned liquor and beer store in Iceland. High prices, small spaces, and surly staff (from my limited sample size). The first store hours we found were: 2-6pm. Did you know beer was not relegalized until 1989 in Iceland? Sounds like a complicated relationship.  Why Iceland Banned Beer (BBC, March 1, 2015)