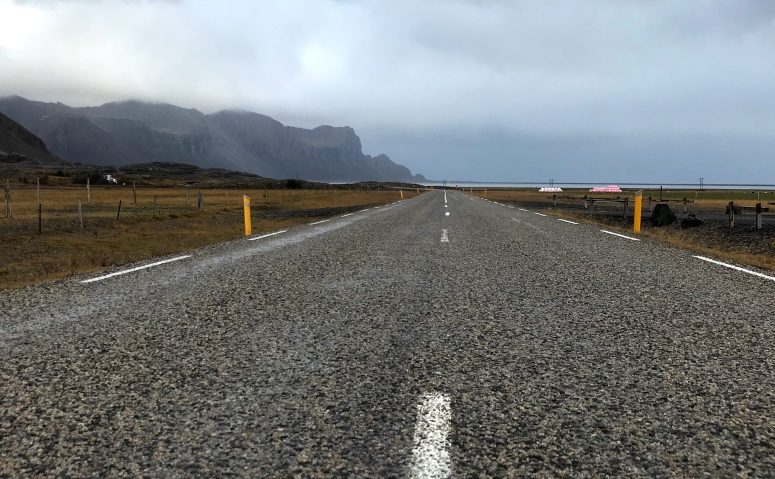 On Wednesday morning, a good breakfast spread included with our stay gave us a peek at the restaurant space at the AirBnB in Holmur (photo after the jump). It was easy to imagine it as a lively popular affair in the Summer. This was perhaps the best hosted breakfast bar of our trip! Darn tasty. I took a few extra moments to gaze out the window to the bucolic paradise of ducks and geese chillin’ in the brush, in front of the distant Vatnajökull glacier. I was a little sad to miss communing with the farm goats, as getting out the door and on the road took priority. This was to be one of the longer stretches of our drive around Iceland.

Fun fact: the in-house brewery was not allowed to sell us bottles for the road. Exploration of beer laws in Iceland continue.

K redeemed our Tuesday thermal pool shenanigans with research on HotPotIceland.com [13] and a willingness to pay a little kronar. By now the sullen emo-epic landscape had soaked into our bones and settled more comfortably. The hot pot just past Holmur around 9 or 10 AM was an unexpected treat, what looked like shipping containers on the outside were clean (!) changing rooms on the inside –warm, neatly appointed spaces to change civilly. The water in the hot pots was hot, the scenery was a romantically haunting brand of mountain views, and the other guests were few. The collection can was honor system. We were happy and refreshed.

I was secretly conflicted on if the Scandinavian guests were aghast we hadn’t pre-rinsed in the freezing cold shower, since I had read that’s a thing, but I had just showered 30 minutes before. My bad (now you don’t have to, since I provided that link just now). They left shortly afterward.

This was our longest drive day on the island, and we blithely frittered it away stopping in the fishing village of Hofn for lunch, perusing their museum of glacial travel (old school crampon technology, woah!), watching glacial flooding videos, stopping roadside to take a picture of every gosh darn thing possible. In Hofn, we sat for lunch at Kaffi Hornið. I ordered a reindeer burger and fries, and fish and chips. We got order envy as we realized everyone else kept getting the lunch special: something involving a humar soup. [14] Sour grapes, I couldn’t have eaten it anyway with my allergies. The reindeer burger was.. a hearty burger. Kris amended his fish and chips order with some humar soup.

Selfies in the road–

Not endorsed by me.

We passed sparse villages, destroyed by glacial flood (and subsequent economic downturn). I even snagged a Foodie Tourist photo of a Slow Food Movement flag.

We also passed the time on the road by:

Eventually, we crossed into foreign-er terrain –the Highlands– icing over, with bits of snow here and there, and numerous nameless(?) waterfalls shrouded in fog. For a brief, terrifying moment as we sped downhill on a switchback, a skull and crossbone flag glowing with red light was the only visible thing coming at us, floating from the fog on high. Finally, at the last moment it revealed itself as part of the inside decor of a giant truck, barreling toward us in the oncoming lane. PHOOM.

Finally, we arrived in Seyðisfjöurðor. The sun had set, and it was dark, but clearly had been a scenic port village view, with the surrounding cliffsides crowned with waterfalls fading into the inky dark. Brr. It was colder over here in the land of the Hidden People. K was clearly also colder. Annoyed at the drive timing, we wandered around look for craft stores that all seemed to be closed. After some fruitless, frustrated , shivery strolling in the streets, we settled to eat at Kaffi Lara’s El Grille Bar. The excellent beer selection and solid dinner turned out to be one of our favorite meals of the trip! My grilled fish was delicious. We even had the luck to run into the couple honeymooning from Korea who had stayed at the same AirBnB with us a couple stops ago. The sweethearts brought us hand warmers from their homeland, so thoughtful. Hand warmers are pretty nice to have in Iceland’s shoulder season.

Note to self for next vacation: sneakily pay for some honeymooners’ dinner on next travel trip.

Café Lara El Grillo Bar is named after Lara, a local legend that lived in the house for decades. Before the bar came in to existence the house was simply known by the name: Lara’s House. Lara was a very resourceful and imaginative woman and stories of her are popular around the kitchen tables of locals. Among the things she came up with over the years to earn a living was cooking fish and chips for the British fishermen, staging seance meetings and selling lottery tickets. Ask the bartender for stories of Lara.

After a satisfying dinner, we drove West over the highlands, through the town center of Egilsstaðir to Guðrun’s AirBnb cottage outside Egilsstaðir. The drive out past town came with an extended suspenseful moment, as we sped along a pitch-dark country road beyond the GPS pin into further darkness. It was certainly easy to imagine folks more-than-human inhabiting these lands… [15]

On the Hidden People

“This is a land where your house can be destroyed by something you can’t see (earthquakes), where the wind can knock you off your feet, where the smell of sulphur from your taps tells you there is invisible fire not far below your feet, where the northern lights make the sky the biggest television screen in the world, and where hot springs and glaciers ‘talk’,” Gunnell said.
“In short, everyone is aware that the land is alive, and one can say that the stories of hidden people and the need to work carefully with them reflects an understanding that the land demands respect.”
Terry Gunnell, a folklore professor at the University of Iceland (The Guardian, December 22, 2013)

Thankfully, our faith in driving on was rewarded with a farmstead and cluster of cheery, very well-appointed cottages. We had arrived!

Aurora-hunting shenanigans were had, but limited due to floodlight presence and clouds, our sleepy eyes were thankful. Still, it was enchanting and good for the night photography learning curve.

[13] Shoutout to the two other cold-brave travellers (also from the Pacific Northwest) sitting in Seljavallalaug, for sharing the HotPotIceland.com tip with us!