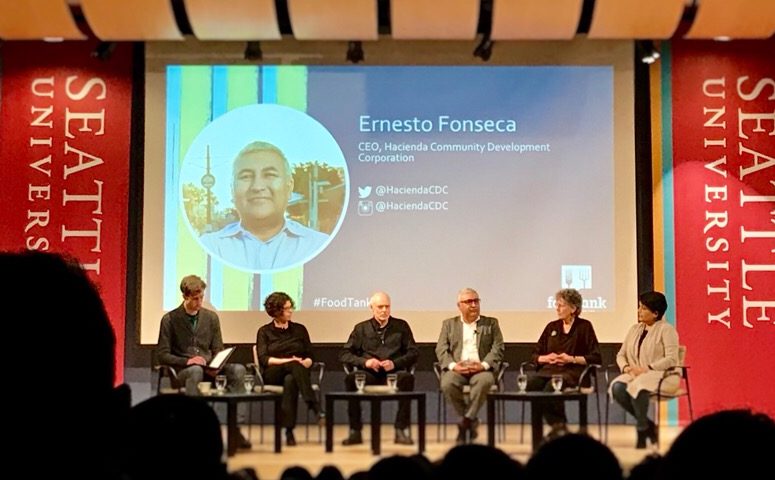 Have you ever attended a conference and walked away super inspired, then wondered a week later if anything stuck?

I wasn’t sure what to expect of Food Tank’s first summit held in the Pacific Northwest. In the end, it was a net positive. Having taken time to mull things over, there are even some unexpected learnings which will stick with me and help me grow going forward. Writing this review actually helped me process some of it, so thanks, Dear Reader!* I’m hoping the food-interested folks reading this, and the others who participated will help keep this learning going.

To skip the narrative storytelling portion, skip to the actual review part.

1) to learn some great gems on local food policy and activism going on
2) to get a sense of what kind of nonprofit Food Tank is
I’d seen their activities from afar online, and read some of their media output for the last couple years. You never know for sure what a group is like until you’ve seen it with your own eyes, so I was curious to see them in action. At first glance, they reminded me of a small urban planning nonprofit I worked for in D.C. 10+ years ago, which was modestly-sized but scrappy, and good at leveraging coalition work across states for advocacy.

My hypothesis was that the crowd and speakers would turn out to be a mix of commercial folks and local bureaucrats, sprinkled in with local superstar celebs (like Renee Erickson!) who may or may not get the tools in this space to bridge the gap. I felt some skepticism when I saw the roster of speakers: more than two dozen names for an eight hour event! A glance at sponsors indicated some industry players too, like the Barilla Center for Nutrition & Health.
It’s important to acknowledge from a decade of policy and nonprofit advocacy work, my own bias sits with policy academics, career bureaucrats, minority voices, and being skeptical of private sector spokespeople and their ability to remain objective. See: the history of the sugar lobby. They also warned us back in grad school to maintain objectivity as policy professionals by being careful around associations with commercial entities.
That said, I recently heard this interesting bit of wisdom:

The challenges in our food system are too big for one person to solve, so it stands to reason that it will require folks from all the parts working together.

Sounds pretty practical to me!

Full Disclosure: I Got in by Volunteering

Yup. They were sold out, I didn’t really have $199 in my budget to spend on a one-day event, they were looking for volunteers, and most shifts were 3-4 hours. What a unique perspective, to participate differently for a portion of it, and still take time to really be present and hear the discussion going on.

Professional Development Pro-Tip: If ever you want to attend an event but don’t have the budget, some ‘sweat equity’ is always worth considering.

See #4 of Lessons Learned below, hahha.

Fun fact: Did you know that Renee Erickson’s restaurant was the second to shift to a no tipping policy alongside Ivar’s in Seattle? File under “Ways to Vote with your Wallet.” Read more on the true cost of tipping at OpenTable

In the end, I walked away having heard from actors in different parts of the food system and their current efforts, especially some exciting grassroots and foundation-driven efforts to look into more. I’m excited to see how the folks from different perspectives proceed going forward, and have some hope and optimism for the future thanks to the way the conversations went. The policy and issue discussion wasn’t a mile deep or anything, and I’m still waiting to see what takeaways, if any, will surface from this, but I still consider it a net benefit. After writing this article, I realize it also got me to re-examine my own biases for who speaks on policy issues, so hopefully in the future I’ll be even more able to step outside my own academic/policy/social justice comfort zone to hear ideas from private industry in the name of the greater good.

Food Tank appears to be mainly a convener. Perhaps also a media news clearinghouse kind of think tank, I’m not sure what else, based on the very full multi-continental event listings on their site, and a look at their 990 (nonprofit tax statement) They were very sharp on giving people a solid platform to share their messages and start some dialogue, also very smooth on audio/visual recording, more on this later.

Speakers Who Caught My Attention

“We need to stop underwriting the costs of cheap food that is harming our health, our agricultural communities, and our environment on so many levels, and we need to encourage a shift to fairly priced food.  With that said, it will not be an easy conversion to have, and this sort of change will take time. We need to find ways to make good, healthy food accessible for lower-income communities. Oftentimes, the very farmers growing our food can’t afford to buy it.” – Melony Edwards

“We care about them and they’re our family and we want them to be happy.” – Renee Erickson

On Community Gardens:
“The potential that I see in these places is that you can also customize and culturalize the kind of foods that you grow in those locations. You’re not only being localized in terms of your food production, you’re also bringing the cultural access to your community garden. […] That’s one of the things I’d like to see more exposure and scaling in other climates.”
-Ernesto Fonseca, CEO, Hacienda Community Development Corporation

Midday Panel Video: hear Sharon Lerman speak to Fresh Bucks’ amplifying buying power of low-income folks’ to buy fruits and vegetables, Ernesto Fonseca on his learnings from Phoenix and community development in Phoenix and others at the midday panel.

an Underrated Skill in the Nonprofit World

The team in charge of a/v was really smooth. As a volunteer I felt mildly intimidated by their style, which reminded me a bit of what I imagine an old-school circus or Hollywood set was like, but it was definitely a cut above any of the annual events I’d seen in my early nonprofit days. That said, I heard the Facebook live feed had issues. But..they had a Facebook live feed! Lots of folks in public sector can be so scared of litigation they won’t even consider it.
Even better than this: while I suspect they were somewhat proprietary of the summit attendee list, there is now a clear online “paper trail” of the discussion, and the speakers highlighted

Left Coast Is the Best Coast! A Little Parochial Jab

I heard some complaints about it feeling like a town hall when audience members spoke at length during Q&A with speakers. This may be a learning process for East Coast folks, but from my decade in local government, I can say this is reflective of the decision-making process in the PNW, where everybody likes to have their say and feel heard. This can be useful for consensus building –or delay decision-making if an overwhelming quorum is needed and the group doesn’t collectively feel like moving forward– but it can also really move good, inclusive policy if you get the right people at the table at the right time.

Trial Event Rating: 4 of 5. Net good, not too much harm.
Novelty Rating: 4 of 5. Interestingly diverse mix of speakers, good for more thought outside the “Ivory tower” of academia or bureaucrat-ese.
Likelihood of Repeat: 50% See below for other prospects.
Lessons Learned:

How’d They Pack All Those Speakers In?

I’m still not sure. In the end, it was indeed a LARGE mix of speakers. Yet, those chosen as moderators did an impressive job of giving different speakers their air time, even including the people of color. They appeared mindful of the power differences between policymakers and other folks such as farmers, and worker advocates. As some one who’s sometimes extra sensitive to this sort of thing, I was pretty happy about the relative mindfulness of the moderators, even while trying to keep on schedule. I can tell you I would’ve had a hard time doing as well. In trying to write this, I found it tempting to mention at least a dozen speakers, so now I understand the temptation. They were all so interesting, and it brought together so many perspectives!

*Special thanks to Kylie, James who introduced us, Abby, Susan, Esther, Ashley, and Arianna for their various parts in motivating me around this event.