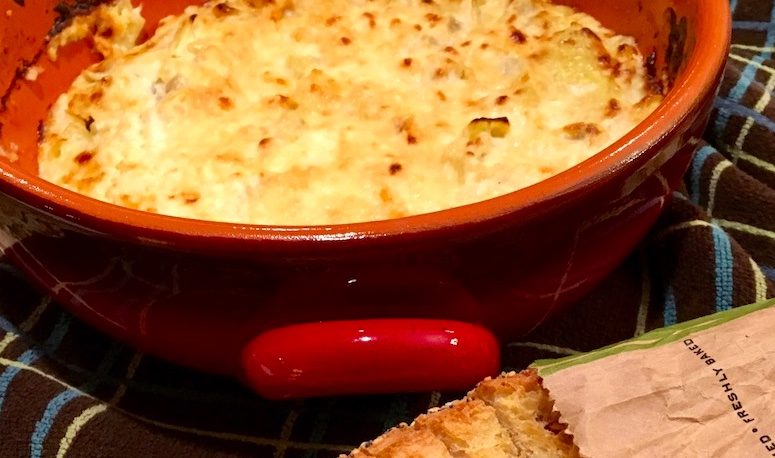 Have you flown thousands of miles for the holidays and unwittingly still found yourself signed up to bring a dish for the family potluck? Have all the gifts been arranged and wrapped by your helpful partner (or recent Past Self) , patiently helping you bear the crush of expectation to somehow visit 50+ people in the span of a few days? Do you still feel that inexplicable competitive urge to “win” the potluck?
Well my friends, I’ve got the recipe for you. Here’s my fallback, which has only 4 critical ingredients, 1 bonus, and the real secret ingredient is finding out when the store near where you’re staying is open on Christmas Eve day, Christmas Day, or whatever other  holiday you are celebrating.

Lots of other people tend to have some of these things lying around their house already, I try not to use too many canned products in my cooking, but I do keep canned artichokes around so I can make this on short notice.

This was originally from my friend Gihani back in 2007 when I live in DC, she got it from her husband who got it from his mom. I’ve refined it only a little, because the base was just so solid.

To serve with: corn tortilla chips (gluten friendly),baguette slice, toasted to a crisp, or anything else edible and crunchy.
Steps

This is a novelty for me insofar as I don’t make it for my lactard self, since it involves a heavy reliance on 2 kinds of dairy products and it’s so rich. Other than that, the only novelty lies in counting up the compliments you can collect when you take it to the potluck. 😀

Likelihood of Repeat: 70% it’s been a pretty consistent outcome these last ten years.

Lesson learned: I’m trying it next in a larger metal pan and avoiding the more insulated glass pan option lest it get soggy. I’m hoping this will yield a crispier product than an 8 x 8 Pyrex. Also: you may be in for some minor debate with your host to get oven time, so plan ahead, then plan again once they finally hear what you were saying and think it through for their 2 hour duck roast oven  monopoly. Another lesson learned from a 2009 visit to San Francisco: never butter the baguette slices and lazily set it to broil. You may set off the smoke alarm and wake ups napping baby! Also, if you’re me, you might get a lecture on butter’s smoke point from your elder (but it came from a place of love).