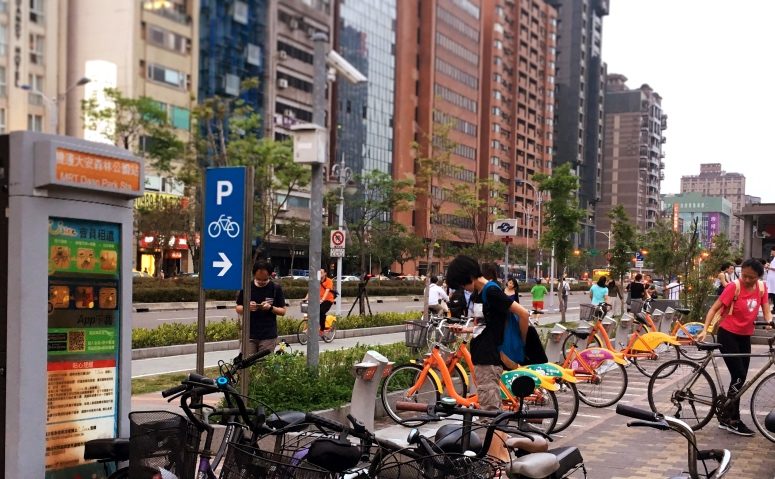 Folks, I went to school for 24 years, the last few of which focused on urban policy, and my urban planner friends will be entertained when I say,

Taipei has SOLVED the last mile problem -down to the last two feet.

It is SO easy to get around! ..once you take a few steps to get going. Here are a few tips I learned from my trip there.

5 Things to Know About Getting Around Taipei

1. Take the MRT from TaoYuan Airport to the Taipei Main Station. There’s an express train, you’ll need NT broken into 100s, the machines won’t take large bills you’re likely to get from the ATMS. Go to a nearby kiosk for change. If there’s a lady standing next to the ATMs gesturing at you, that’s probably what she’s been hired to try and tell you.

2. An Easycard can pay for the MRT, subway, buses, some cabs, Youbike rental, and even the 7-Eleven. That’s right, you could buy yourself a convenience store lunch, or water to stay hydrated in the humid climate. Buses are a breeze if you have a smartphone and a data plan, even without a mastery of Chinese. The buses are very frequent. I heard from my mama’s retired friends that retired folks with a national ID get a number of free rides per month. They say they take the bus all the time and never run out of credits!

3. What’s that? Bike rental? Yes! you can even rent a Youbike, BUT you need a credit card, and a local cell phone number (possibly you can use the number of the one you rent from the airport. Bike stations tend to be at subway stops, and bike paths are a-plenty.

4. If you have a big gap of time between your hotel checkout and departure flight, you may be able to check your luggage at the Taipei Main Station and wander the city baggage-free! It’s checked in Taipei and sent all the way to your airline and airplane. This was awesome. It’s a bit of a walk to find, but follow the signs to Taoyuan Airport MRT A1 and you’ll thank me later. Check here if your airline is one of the ones that takes check-in from here.

5. Bonus Tip: The train to Kaohsiung is only two hours (Taipei to Zuoying). Taiwan boasts “the world’s most beautiful subway,” They were holding a classical music concert next to it when I visited.

Why is it so easy in Taipei to get around?

I suspect it has to do with having an aging population, and a great respect for your elders, for whom getting around that very last mile can be a much bigger problem. In this case, it makes sense that a society would bother to try and make that problem solved. Brief googling is not yielding some awesome JSTOR articles to feed my confirmation bias, so if you have any, feel free and encouraged to send them my way.

> What to Know About your Phone for International Travel